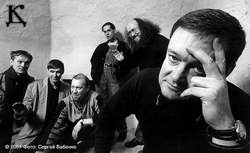 DK — the Soviet alternative rock group formed in Moscow in 1980 by the political strategist, the publicist, the poet and the musician Sergey Zharikov. It is one of the most popular groups in Russia because of the scandalous creativity which is referred quite often to a genre by "psychedelic rock" or "the Moscow conceptualism". Founders of the Russian experimental music and low-fi music.