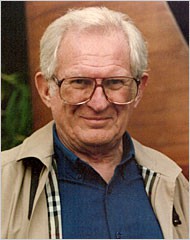 1919-2008 US, Philadelphia
Composer / Arranger of Soundtrack and Classical
A.k.a. Alexander Mair Courage, Jr.

Alexander Courage (born December 19, 1919, Philadelphia, Pennsylvania, USA - died May 15, 2008, Pacific Palisades, California, USA) was an American orchestrator, arranger, and composer of music, primarily for television and film. He was the composer of the original Star Trek theme music.

Star Trek Theme (Main Title) on Star Trek: Volume 1 - The Cage and Where No Man Has Gone Before by Alexander Courage

The Cage - Doctor Bartender on Star Trek: Volume 1 - The Cage and Where No Man Has Gone Before by Alexander Courage

Star Trek Theme (End Title) on Star Trek: Volume 1 - The Cage and Where No Man Has Gone Before by Alexander Courage