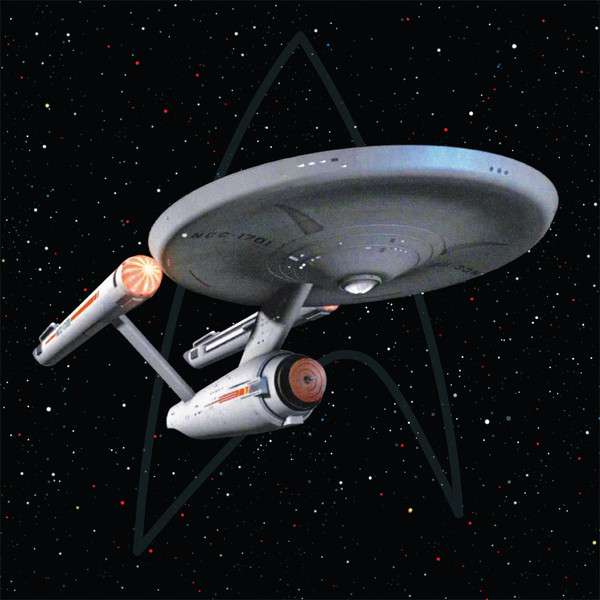 7" playing area. Listed as a 12" single on the sleeve. A: Stereo B: Mono Starfleet Insigna-Shaped Limited Edition of 1701 units. "Theme From STAR TREK (TV Series)" Published by Bruin Music Co. (BMI) Recorded at Glen Glenn Sound (Desilu-Paramount) Stage F, Hollywood, California Main Title (Season Three) recorded 6/25/1968 Main Title (Season One) recorded 9/20/1966 Star Trek TM & © 2016 CBS Studios Inc. Notes from the record label: Commemorating the 50th anniversary of the legendary Star Trek franchise, La-La Land Records proudly announces the STAR TREK 50th ANNIVERSARY STARFLEET INSIGNIA-SHAPED DIE-CUT 12’’ VINYL SINGLE, featuring Star Trek: The Original Series Season One and Season Three Main Title themes on 180 gram, gold-colored vinyl, die-cut in a shape inspired by the iconic Starfleet Insignia. In 1966, the Season One Main Title from Star Trek: The Original Series beamed throughout the heavens for the very first time, heralding the launch of the Starship Enterprise and a television program that would weave its way into the human experience forever. That defining moment is captured and celebrated on this very special, collectible release. Die-cut from a 12’’ vinyl disc, this Starfleet Insignia-shaped single features The Main Title (Season Three – Soprano Version, long ending, stereo) on Side A (1:01), and The Main Title (Season One – Cello Version, short ending, mono) on Side B (0:51). The golden-hued single stands 10 3/8’’ tall and 6 ¼’’ wide, and is housed in an attractive jacket showcasing the iconic Starship Enterprise in fight, within the vast wonders of space.