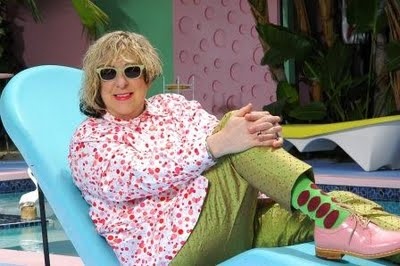 *1947 US, Detroit
Songwriter of Pop
A.k.a. Alta Sherral Willis

Allee Willis (b. 1947) is an American songwriter, multimedia artist, set designer, writer, director, and collector. Willis is known as an author/co-author of a few seminal pop and disco megahits, including September and Boogie Wonderland by Earth, Wind & Fire, Neutron Dance by Pointer Sisters, What Have I Done to Deserve This? by Pet Shop Boys (co-written with Neil Tennant and Chris Lowe), and I'll Be There For You (Theme From "Friends") by The Rembrandts – one of the best-selling TV themes of all time. Throughout her career, Allee Willis has collaborated with many prominent artists and composers across various genres, such as Bob Dylan, James Brown, Herbie Hancock, Deniece Williams, Cyndi Lauper, Lamont Dozier, and Maxine Nightingale. In 1986, Willis won a Grammy Award for Best Score Soundtrack for Music From The Motion Picture Soundtrack "Beverly Hills Cop", which included two of her songs: Neutron Dance by the Pointer Sisters, and Stir It Up by Patti LaBelle. She was inducted into the Songwriters Hall of Fame in 2018. Originally from Detroit, Willis earned a degree in Journalism from the University of Wisconsin–Madison and started her career in New York as a copywriter for Columbia and Epic labels. She was writing liner notes, as well as commercials for print media and radio, specialized primarily in label's female and African-American acts. In 1974, Allee Willis debuted with Childstar, a collection of ten songs released by Epic, and soon after she was recognized and employed as an author by Bonnie Raitt, Brenda & The Tabulations, and Carol Douglas. Her career really blossomed from the late seventies onward. From 1986 to 1988, Willis was a columnist at Details Magazine where she published an interview with The Del Rubio Triplets, a novelty extravaganza trio of elderly twin sisters discovered by Allee a few years prior. Allee Willis directed several music videos for Debbie Harry, The Cars, Heart and other performers in 1987–91. In 1991, Allee Willis became one of the first music artists to recognize and evangelize the Internet as an upcoming new form of mass entertainment following radio, television, and cinema. She came up with an idea of willisville, a visual collaborative network and interactive, story-driven online social world. Preceding modern social networks by at least a decade, willisville was supposed to combine traditional media, commerce, and virtual games by allowing Internet users to connect with each other to share ideas, collaborate, and exchange information. Mark Cuban (who later owned NBA team Dallas Mavericks and pioneered online streaming for sport events) became a CEO, while producer and multimedia artist Prudence Fenton (Grammy winner for Peter Gabriel's Steam video) joined Allee as one of the chief engineers and designers of the project. Several showbiz and tech giants, such as AOL, Microsoft, Warner Bros. Entertainment Inc., and Disney recognized a business potential of the concept, while Intel Corporation sponsored a creation of willisville prototype in 1995. The project turned out to be too innovative for the mid-nineties, though, and was abandoned several years later. Allee Willis is also a renowned collector of kitsch/Atomic Era artifacts and art objects from the 1950-60s, and she opened a virtual Allee Willis Museum of Kitsch in 2009.