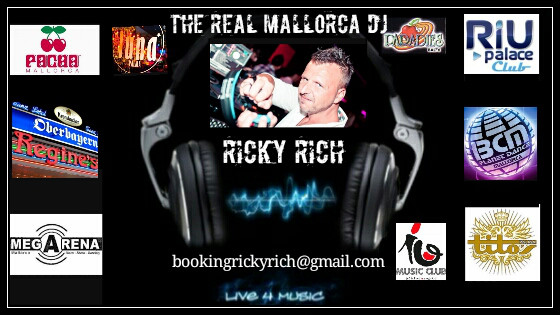 Angel Ferrerons (aka Ricky Rich) was born in Palma de Mallorca on 15/6/1975, the 16 of May of 1988 and after 4 years of radio in diverse radio stations, like Onda Cero Music, initiates its trajectory as DJ in Joy Palace (Mallorca) he was 13 years old and in this way it begins a long professional career. From 1988 to 1991 he is resident in Joy Palace with DJ Sammy, there he learns to work with German and Duth crowds that mainly joined the club. In 1991 Ricky initiates a new time in Zorba's (Mallorca) like first DJ, a big responsibility if we thought that in that time he was just 16 years old. After 3 years came the chance that every DJ in Mallorca dreams of play in BCM, Ricky received the most important offer of his life, joining BCM Planet Dance supposed playing for british crowd. It wasnt any problem, because he was resident in BCM till 1999. BCM Planet Dance introduced Ricky in the international market, because he met and share cabin with DJ's and Producers like Carl Cox, Judge Jules, Paul Van Dyk, Sister Bliss (Faithless), Des Mitchell, Tall Paul, Paul Okendfold, Seb Fontaine, Sasha, Claudius Coccolutto, Laurent Garnier, Boy George, Tony de Vit, Alex Neri, Steve Lawler, Dave Moral, Eric Morillo, Roger Sanchez, Jeremy Healey, DJ Sneak, Frank Trax, Darren Emerson (Underworld) and many others, also had the opportunity to work next to artists like, Technotronic, Outher eBrothers, Black Box. In September of 1997, Ricky knew Julio Posadas in one its numerous performances in BCM, a great friendship was born, that was reflected in its first hit and Nº1 in Spain Kindred Spirit "I like this", of this union came more than 15 productions of big success in Spain. Year 2000 was one of his best years like resident DJ of Joy Palace, next to DJ Sammy and Loona and like producer thanks to the participation in which would be the greater success of dance music during the last years ATB ”9PM Till I come". In this club had the pleasure to share cabin with the great ones, like Sash!, Cosmic Gate, Aquagen, Dj Hooligan, Kosmonova KäiTracid, Pulsedriver, Scooter, Klubbheads, Gary D, dj Tomcraft, between many others. In 2002 until today, joins the club wich can be considered the club of all the Playa de Palma Riu Palace, where meets again with DJs and Producers of present success like Master Blaster. At the present time also it shares its residence like DJ in the best club of Palma, IO Music Club where all the weekends of the year play this best House sessions . House and Elektronic Sounds specialist since 1988, awarded with 7 Balearic DMC Technics award and 1º national DMC Technic Spain in 1996, golden record 1998 with the album ”DancesSessions Club", 4 diamond discs and 5 of platinum to work ”9PM Till I come” 1999 with 4.500.000 discs sold. Resident DJ at Disco Regines in Arenal Mallorca.