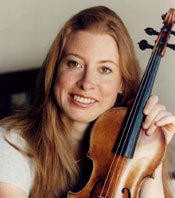 Australian classical violinist. She obtained her degree from the Canberra School of Music, under Charmian Gadd. She then studied violin at the Guildhall School of Music and Drama in London with David Takeno and learned baroque violin from Catherine Mackintosh, Elizabeth Wilcock and Ingrid Seifert. She played with many British orchestras and chamber groups such as the English Concert, Orchestra of the Age of Enlightenment, English Baroque Soloists, Purcell Quartet, I Fagiolini, London Baroque, London Classical Players and King’s Consort. She became leader of the Gabrieli Consort, Hanover Band and Newcastle-based Avison Ensemble. In 1998 she returned to Australia where she founded the Sirius Ensemble with Erin Helyard, and this ensemble expanded into the orchestra for Pinchgut Opera, for which she has lead many productions. She also leads the ABC recording orchestra Sinfonia Australis, and its baroque arm the Orchestra of the Antipodes. She has played with the Australian Chamber Orchestra (including as leader), the Ensemble of the Classic Era and Ludovico’s Band.

Concerto in C Minor for Violin and Oboe BWV 1060: 2. Adagio on Souvenirs: Sublime Music For The Oboe by Diana Doherty & Sinfonia Australis

Maranoa Lullaby on Song Of The Angel by Jane Sheldon

From a Dream on Silent Bridge by Élodie Sablier