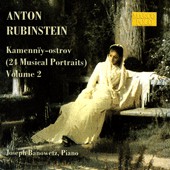 Composer(s): Rubinstein, Anton Artist(s): Banowetz, Joseph Label: Marco Polo Genre: Instrumental Period: Romantic Catalogue No: 8.223847 Barcode: 0730099384728 http://www.naxos.com/catalogue/item.asp?item_code=8.223847 Total Playing Time: 00:58:33 One of the greatest virtuoso pianists of the 19th century, highly influential in Russian musical circles, and a gifted conductor, Anton Rubinstein, would have wished to be remembered as a famous opera and symphonic composer, and wrote a considerable amount of music in both forms. Yet little remains in the repertoire, and it was to be the salon pieces composed for piano, such as the Melody in F, by which his name is best remembered. As a young man he embarked on 24 portraits, the Kamennoi-ostrov (Rocky island), a monumental work lasting almost two hours. It mixes virtuosity with Rubinstein's gift of writing the most attractive melodies. This is the second of two discs.