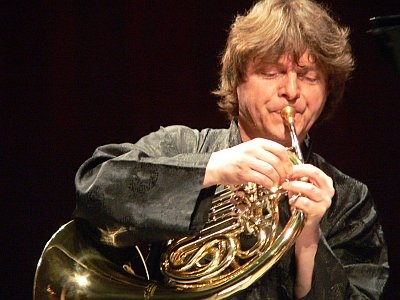 One of most unusual Russian musicians, Arkady plays French horn, flugelhorn, alpenhorn and many more unusual wind instruments. A native of Moscow, at the age of six Arkady Shilkloper began playing brass instruments and studied flugelhorn at the Moscow Military Music Academy until 1974. From 1978 to 1985 he was a member of the orchestra of the Bolshoi Theatre and the "Bolshoi Brass Quintet". With this world-famous ensemble and as a member of the Moscow Philharmonic Orchestra from 1985 to 1989 he undertook numerous worldwide concert tours. Alongside with that he started playing traditional jazz with double-bass player Mikhail Karetnikov and avant-garde jazz in saxophonist Sergei Letov's band Three O (1985-1990). Since the collapse of the former Soviet Union Shilkloper has worked independently both as a solo performer and, since 1991, with Alperin and Starostin in the Moscow Art Trio and in other formations. In 1994 he played with Lionel Hampton, Elvin Jones, Lew Soloff and Herb Ellis in Idaho/USA and lectured as guest professor in Kansas City. He also has worked with Pierre Favre's "Singing Drums", Louis Sclavis, Rabih Abou-Khalil, Jon Christensen and in Christian Muthspiels' "Octet Ost" . Since 1997, he also plays in two Russian trios: one with St.Petersburg's best jazzmen - acoustic bassist Vladimir Volkov and piano player Andrei Kondakov and the other with Volkov and Sergei Starostin. He also participates in international project like Swiss musician John Wolf Brennan's Pago Libre and records as a guest musician with bands like Vienna Art Orchestra. Shilkloper is in demand as a soloist and a teacher for brass instrument workshops and symposia the world over.

Tales for Alexandra on Hornology by Arkady Shilkloper acoustic quartet

Song on Wave Of Sorrow by Mikhail Alperin & Arkady Shilkloper

Song For Everyone on Pilatus by Arkady Shilkloper

Unisons on Wave Of Sorrow by Mikhail Alperin & Arkady Shilkloper

Get up and Go on Lustrum by Arkady Shilkloper & Vadim Neselovskyi