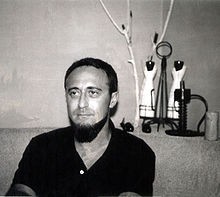 Arnold Fishkind, more often credited as Arnold Fishkin (born July 20, 1919, Bayonne, New Jersey - d. September 6, 1999, Palm Desert, California) was an American jazz bassist who appeared on over 100 albums recorded between the '30s and the '80s. During his career Fishkind performed swing and bebop jazz, television, jingles, and even western themed music. Although there is no mention in the record from whom he learned bass, he gave as his primary influence Jimmy Blanton.