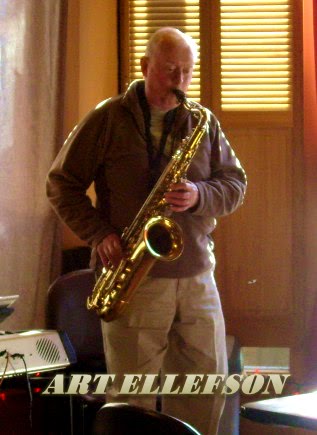 Canadian saxophonist, born in Moose Jaw, Sask., 17 avril 1932. He began his career in Toronto with Bobby Gimby and others before moving to London in 1952. He played saxophones (soprano, alto, tenor, baritone) and clarinets in British dance bands, including the Vic Lewis Orchestra 1953-19577, and was a soloist with the Ronnie Ross-Allan Ganley Jazzmakers and 1960-5 with the John Dankworth Orchestra. He was also a member of touring bands led in England by Woody Herman and Maynard Ferguson.w Ellefson lived 1969-74 in Bermuda, then returned to Canada where he worked outside of music in various Ontario communities but played tenor saxophone with Nimmons 'N' Nine Plus Six until 1977 and appeared occasionally thereafter with his own groups in Toronto. In 1988 he moved to Courtenay, BC, teaching at Malaspina College in nearby Nanaimo and forming a quartet, Modus, that included his son Lee, a guitarist.

Have You? - Remastered 2022 on The Art Ellefson Quartet Featuring Tommy Flanagan by Art Ellefson