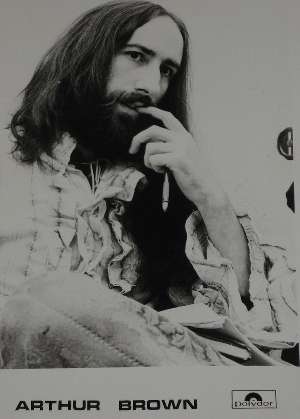 Arthur Brown (born Arthur Wilton Brown on 24 June 1942) is an English rock singer best known for his flamboyant theatrical performances, powerful wide-ranging operatic voice and his number-one hit in the UK Singles Chart and Canada, "Fire", in 1968.Brown has been lead singer of various groups, most notably The Crazy World of Arthur Brown and Kingdom Come, followed by a varied solo career as well as associations with Hawkwind, The Who, Jimi Hendrix, Klaus Schulze, and Frank Zappa.

Fire on Fire by Arthur Brown

Whistlin' Past the Graveyard on Monster's Ball by Arthur Brown

Lady Vengeance on Constellations by Moulettes

The Monster Hop on Monster's Ball by Arthur Brown

I Feel Free on Monster's Ball by Arthur Brown