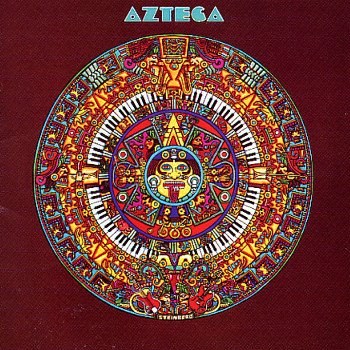 Azteca was a Latin jazz-rock-fusion group formed in 1972, started by Coke Escovedo and his brother Pete Escovedo, who had played on Santana III (1971). Azteca was the first large-scale attempt to combine multiple musical elements in the context of a Latin orchestra setting, and featured horns, woodwinds, multiple keyboards, three vocalists, guitars, drums, and multiple Latin percussionists. Onstage, the band consisted of between 15-25 members, and toured with acts including Stevie Wonder. Other notable Azteca members included drummer Lenny White, bassist Paul Jackson (2), vocalist Wendy Haas, trumpeter Tom Harrell, guitarist Neal Schon, vocalist Errol Knowles and percussionist Victor Pantoja. The group was also a musical starting point for Latin percussionist Sheila E. (the daughter of Pete Escovedo), who appeared with the band as a teenager. They released only two albums between 1972-1973.

Pala Mande on Maktub by Azteca

BOB on BOB by Sapte & Azteca

Vvs on Maktub by Azteca

Sile on RMN by Azteca