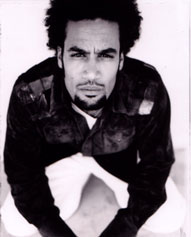 Benjamin Chase "Ben" Harper (born October 28, 1969) is an American singer-songwriter and multi-instrumentalist. Harper plays an eclectic mix of blues, folk, soul, reggae and rock music and is known for his guitar-playing skills, vocals, live performances, and activism. He has released twelve regular studio albums, mostly through Virgin Records and has toured internationally. Harper is a three-time Grammy Award winner as well, winning awards for Best Pop Instrumental Performance and Best Traditional Soul Gospel Album, in 2005. He also won a Grammy for Best Blues Album in 2014.

Burn One Down on Fight For Your Mind by Ben Harper

Forever on Welcome To The Cruel World by Ben Harper

High Tide Or Low Tide on Jack Johnson & Friends: Best Of Kokua Festival, A Benefit For The Kokua Hawaii Foundation by Jack Johnson

Walk Away on Welcome To The Cruel World by Ben Harper

Amen Omen on Diamonds On The Inside by Ben Harper