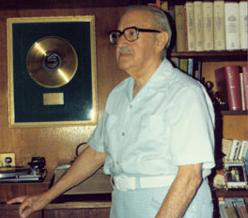 American jazz violinist, composer and bandleader. Born : March 05, 1898 in New York City, New York. Died : July 15, 1980 in New York City, New York. After starting out as a violinist in the orchestra of Charles Strickland, Selvin formed his own band that played in 1917 (seven years) to "Moulin Rouge Club" in New York. In July 1919 he recorded "I'm Forever Blowing Bubbles" for Victor Records (which was a hit) its first session. Later also recorded for Vocalion, Brunswick, Okeh, Paramount and other labels. After retiring in 1934 from the music scene, working as a music supervisor for the A & R, Columbia Records (and in 1952 for RCA Victor), retiring from work in 1963.

Let Me Sing and I'm Happy on Irving Berlin: A Hundred Years by Various Artists

Margie on Echoes from the 1920s by Various Artists

Why Do You Suppose? on I Have to Have You by Ben Selvin & His Orchestra