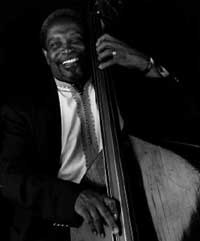 Jazz bassist, born December 13, 1930, Tennessee, USA, died 4 June 2013 on Hutchinson Island, Georgia, USA. He began his career in Nashville, before settling in California, where he played with Art Pepper and Shorty Rogers, among others, and was an participant in the legendary “Jazz of Two Cities.” By the early 1960's, he was regularly performing and recording with such greats as Herbie Mann, Billy Taylor, Dexter Gordon, Buddy Rich, Quincy Jones, Marian McPartland, and Mel Torme. Composer of over 300 titles, many of his songs are jazz standards: “Comin' Home Baby” was a hit for Herbie Mann, “Devilette” and “The Message,” both recorded by Dexter Gordon and “ Right Here, Right Now” by Billy Taylor are just a few of his many title songs.