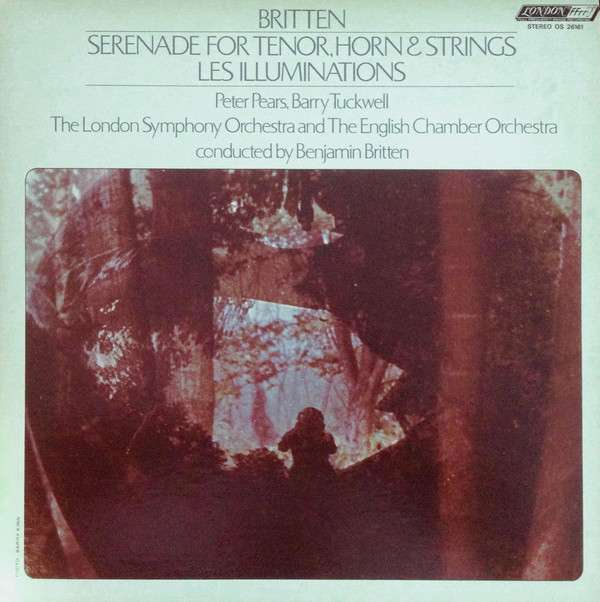 "Britten and Pears recorded the piece... again in a famous recording for Decca records in 1963, when Barry Tuckwell took the horn part and the London Symphony Orchestra accompanied." https://en.wikipedia.org/wiki/Serenade_for_Tenor,_Horn_and_Strings All LP versions of this performance cataloged by Worldcat.org cite release date as 1964: https://www.worldcat.org/title/serenade-op-31-for-tenor-solo-horn-and-strings/oclc/3818733/editions? Cover art and release number very similar to Discogs release described as OS 26161, US, 1971, but differences in this release noted: - LP Labels state "Made in England" ... and "The Decca Record Company Ltd."; - interior booklet notes state copyright "(c) 1964, The Decca Record Company Limited, London" and "Exclusive U.S. Agents, London Records, Inc. New York, N.Y. 10001 - LP Back Cover clearly states "copyright,,, property of LONDON RECORDS OF CANADA (1967) LTD." - Side A Matrix/Runout is 9W rather than 10W in US version - Cover background colour light turquoise rather then dark powder blue of US release - Uses lengthwise London FFrr logo throughout This combination of evidence suggests that: - the media (LP pressing) of this release was identical to the UK Master Release of 1964, and NOT a later US pressing; - this release was marketed in Canada by a different distribution pipeline than the US release attributed to 1971; - it may of may not have preceded the US release date, but could not be earlier than 1967. -the side A run-out stamp strongly suggests this pressing is not identical to the US release, and predated it. My searches have failed to find other examples of this unique combination of identifiers, but when it is found the assumption is that OS 26161 applied only to the 1971 US release. Closer examination of the US examples, such as the Logo and copyright notices included, is requested.