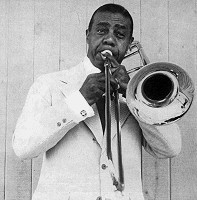 Jazz trombonist associated with the swing genre (January 31, 1907, NYC – December 28, 1985, NYC) Morton's first break came in 1923 when he was hired by Clarence Holiday. In 1926 Morton started working with Fletcher Henderson, where he collaborated with fellow bandmate/mentor Jimmy Harrison. In addition to performing with Henderson, Morton played for Don Redman from 1932-1937 and with Count Basie from 1937-1940. Morton began working with Teddy Wilson in 1940, leaving Wilson's group in 1944 to play with Edmond Hall's sextet. He also lead own band during this time. At this time Morton began his career as a trombonist in a number of Broadway shows, and once Broadway became Morton's main gig, he stopped any long-term associations with specific groups, but continued to record as a sideman. After leaving Broadway he found work with a number of traditional jazz groups, subbing often for friend and fellow ex-Basie trombonist Vic Dickenson. He eventually replaced Dickenson in Saints & Sinners, and also worked with Wild Bill Davison's Jazz Giants, Sy Oliver's nonet, and Ray Nance's group. In 1964, he toured Africa with Paul Taubman as a part of the State Department jazz diplomacy program. From 1973-74, Morton worked with The World's Greatest Jazzband. Morton became ill after his stint with the World's Greatest Jazz Band and had to stop playing for three years. He resumed his musical career in 1977, recording with Earl Hines and appearing regularly on Art Hodes' television show. Unfortunately, health issues continued to limit him, and he passed away in New York City on December 28, 1985 due to complications from pneumonia.

5400 North on The Nifty Cat by Various Artists

Let Me Dream on The Complete Decca Recordings by Count Basie

All of Me on In the Mood: Jazz Romance by Various Artists

Ball of Fire on The Nifty Cat by Various Artists

Jolly Hollis on The Nifty Cat by Various Artists