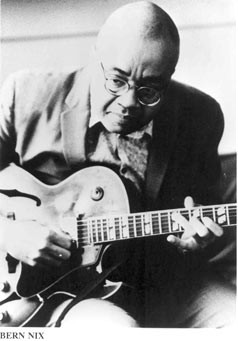 American Jazz/No-Wave guitarist, born 21 September 1947 in Toledo, Ohio, USA; died 31 May 2017 in New York, New York, USA. Hailed as one of the greatest jazz guitarists of our time, Bern was voted among the top ten jazz guitarists poll by Down Beat magazine. He recorded and performed with Ornette Coleman from 1975 to 1987. Nix also performed with James Chance & The Contortions and appears on their 1981 Live in New York recording. He has also appeared with Jayne Cortez, John Zorn, Marc Ribot, Elliott Sharp, Jemeel Moondoc, Ronald Shannon Jackson, James Chance, and Kip Hanrahan.