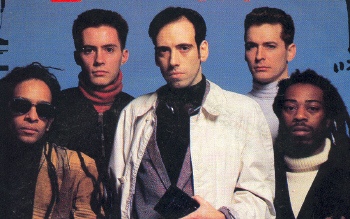 Formed by Mick Jones after he was ousted from The Clash, he continued to develop the sound The Clash had experimented with on 'Sandinista' using breaks, dubs and the heavy use of samples. The debuted with the 1985 release 'This is Big Audio Dynamite', followed in 1986 by 'No. 10, Upping St. (which was co-produced by his former Clash mate Joe Strummer). They supported U2 on their 1987 world tour. In 1988 'Tighten Up, Vol. 88' was released, followed in 1989 by 'Megatop Phoenix'. The lineup from 1984 until 1990 included Mick Jones (vocals and guitar), film director Don Letts (effects and vocals), Leo Williams (bass and vocals), Greg Roberts (drums and vocals) and Dan Donovan (keyboards). In 1990 Mick Jones changed the name to Big Audio Dynamite II (later Big Audio) and the lineup was completely changed. Greg Roberts, Leo Williams and Dan Donovan left for Dreadzone. In 1995 Mick Jones started to use the original name again. 'F-Punk' was recorded with Nick Hawkins, Gary Stonadge, Chris Kavanagh (ex-Sigue Sigue Sputnik), Andre Shapps and Michael Custance. With Darryl Fulstow (who replaced Gary Stonadge), Bob Wond (who replaced Chris Kavanagh) and vocalist Ranking Roger they recorded an album 'Entering A New Ride'. However the record company refused to release it, so they distributed it via download on their website in 1997, making it one of the earliest internet-releases. In 1998 BAD was disbanded but reformed in 2011 for a series of live shows.

Rush on The Globe by Big Audio Dynamite

The Globe on The Globe by Big Audio Dynamite

V. Thirteen on No. 10, Upping St. by Big Audio Dynamite

C'mon Every Beatbox on No. 10, Upping St. by Big Audio Dynamite