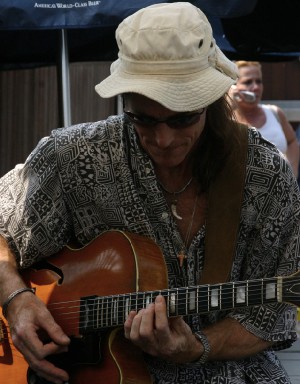 BILL BICKFORD, born and raised in Norwalk, CT, began to play guitar by listening to blues records a la Lightnin' Hopkins and studied with the late Linc Chamberland. He started professionally with local R&B and soul bands before moving to NYC in '77. After some schooling which included a scholarship funded year at Berkley and two at City College of NY, studying composition and arranging with Mario Davidovsky, Edgar Summerlin, and John Lewis of Modern Jazz Quartet, and a few years of free-lancing with Jack McDuff, Dr. Lonnie Smith, Larry Elgart, Bill Bickford first appeared on record with trumpeter John McNeil on The Glass Room In 1982, Bickford joined Joseph Bowie's Defunkt where he remained for the next ten years, contributing several compositions on six records and receiving praise on numerous international tours. Sandwiched in between were gigs with singer Mose Allison, Donald Byrd, the JB Horns and the late Native American saxophonist Jim Pepper. Bickford can be heard with his own trio Bigfood on Semi Precious Metal, also with the funk/trash band Liquid Hips on Fool Injection, and Static, in a jazzier setting with bassist Ed Schuller on The Eleventh Hour or Remembrance with Jim Pepper. Check Paradox (33) - The First Second for power funk-rock live with Billy Cobham and Wolfgang Schmid. And, of course, the CD "Cool Bop Phonics"

Twistedology on The First Second by Paradox

Serengeti Plains on The First Second by Paradox

Parablue on The First Second by Paradox

Mozaik on The First Second by Paradox

Pandora's Box on The First Second by Paradox

Subwayer on The First Second by Paradox

Once In A Blue Mood on The First Second by Paradox