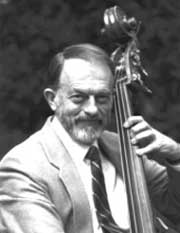 Bill Crow (born December 27, 1927) is an American jazz bassist and author.Crow was born in Othello, Washington in the United States of America, but spent his childhood in Kirkland, Washington. After high school, he briefly played sousaphone at the University of Washington in Seattle. When he joined the Army in 1946, he played baritone horn, trombone, and drums in the army band until 1949. After leaving the Army, he returned to the University of Washington in Seattle and played in a jazz quartet after hours. In January 1950, Crow moved to New York City, briefly studied valve trombone with Lennie Tristano, and met many New York musicians and artists. He bought an old Kay bass and taught himself to play what would become his primary instrument. In 1953 he purchased an old French bass which ha

Father's Footsteps on Crowsongs One by Bill Crow

Deep in My Heart on Crowsongs One by Bill Crow

Going Down on Crowsongs One by Bill Crow