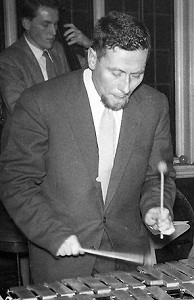 William A. "Bill" Le Sage (20 January 1927, London – 31 October 2001, London) was a British pianist, vibraphonist, arranger, composer and bandleader. His credits include the score for the film The Tell-Tale Heart (1960).A self-taught musician, after working with several small combos, he joined "Geraldo's Navy" and played on Cunard's transatlantic liner, the Queen Mary sailing to New York, where he worked with Lennie Tristano.