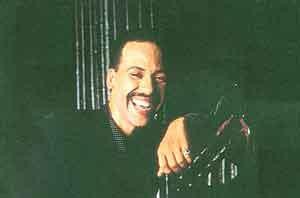 b. 1955, Chicago, Illinois, U.S.A. Billy’s the Godson of the Queen of Gospel Music Mahalia Jackson. As a youth he was the lead voice in his church choir. At the age of nine Aretha Franklin took him under her wing and by age 11 he was touring and recording with ( cousin ) Reverend Isaac Whittman. In 1969, Billy ( 14 yrs old ) was taken on as Aretha's protégé’ and was given studio time by her production company Do It To It Productions. He recorded a single 'Do It Again' with the help of Aretha, Carolyn Franklin and Cissy Houston, however it was not released. 1975 Aretha's backing singer Evelyn Green introduced Billy to Barrett Strong, Where a number of songs came from this partnership including 'Man Up In The Sky', recorded by both Barrett Strong (1976) and Johnny Bristol (1989). In 1979, his friend and attorney financed his debut solo album Billy Always, totally self-written, performed and produced. Though not released officially, two songs 'I Mean To Love You' and 'Some Kind Of Love' were bootlegged and scored success as an illegally released single. The following year he met Willie Mitchell ( known for producing hits for Al Green, Denise Lasalle, Ann Peebles Otis Clay and more ) Mitchell produced Billy's song 'Didn't We Do It' as the first release on Waylo Records in Memphis. Also In 1981, he wrote 'Come To Me' (with Bernie Miller former DJ on WJPC 95 AM in Chicago) for the late Walter Jackson's album Tell Me Where It Hurts'. ( Produced by Chicago’s legendary R&B Producer Carl Davis ) A debut Waylo album Titiled Billy Always was later released in 1982 which included the hit single Didn’t we do it, I mean to love you, love’s knockin’ as well as cover of Al Greens let’s stay together. (Ann Peebles later covered 'Didn't We Do It'). Billy continued to work with Willie Mitchell and Waylo into the nineties, although 1988's 'Watch Out' CD which included the hit Back on track was released on Epic Records. His 1990 album 'Let's Get Personal', included the songs 'One Of Them Thangs, 'Ain't Nothing But A Heartache' and 'I Need You'. Billy is currently working on an inspirational CD. A single is expected by the summer of 2009. This may be the best project yet.

More Than a Minute on Aor Global Sounds, Vol. 3 by Charles Maurice

Back On Track on Watch Out by Billy Always

A Little Misunderstanding on Watch Out by Billy Always

Tell Me You Love Me on Watch Out by Billy Always

Emergency love on Watch Out by Billy Always

Watch Out on Watch Out by Billy Always

Where You Touch Me on Watch Out by Billy Always

Send Ya to Me on Watch Out by Billy Always

Juvenile Delinquent on Watch Out by Billy Always

You Can on Why? by Billy Always