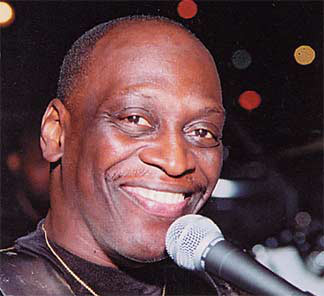 NOTE: Not to be confused with jazz - soul guitarist and "Honky Tonk" co-author Billy Butler (3) Billy Butler (born June 7, 1945, Chicago, Illinois, USA - died April 1, 2015, Chicago, Illinois, USA) was an American R&B and soul vocalist, songwriter, guitarist and producer. He is the younger brother of Jerry Butler with whom he sometimes collaborated along with Curtis Mayfield. Mayfield supervised his first recording session at Okeh in May 1963. He was mainly active in the 1960's and 1970's. He founded the vocal groups Billy Butler & The Chanters, Billy Butler And The Enchanters, and Billy Butler And The Four Enchanters. In 1973, he released an album as a lead singer of Infinity (13), with fellow Chicago singers. In 1977, he released a solo album titled "Sugar Candy Lady". He is sometimes credited as Bill Butler, Billy Butler and W.E.Butler.

The Twang Thang on Legends Of Acid Jazz by Billy Butler

I'll Bet You on Brunswick Essentials by Billy Butler

The Soul Roll on Legends Of Acid Jazz by Billy Butler

Can't Live Without Her on Right Track by Billy Butler

Blow For The Crossing - Instrumental on Night Life by Billy Butler

The Thumb - Instrumental on Night Life by Billy Butler