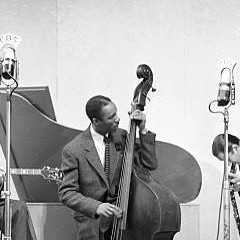 William Taylor Sr. (April 3, 1906 – September 2, 1986) was an American jazz bassist. He was born Washington, D.C. and died in Fairfax, Virginia.Taylor began playing tuba but later picked up bass alongside it. After moving to New York City in 1924, he played with Elmer Snowden (1925), Willie Gant and Arthur Gibbs (1926), Charlie Johnson (1927–29, 1932–33), Duke Ellington (1928), McKinney's Cotton Pickers (1929–31), Fats Waller (1934), and Fletcher Henderson. He recorded with Jelly-Roll Morton on three sessions in 1930. From 1935 to 1940 he again played with Ellington, and it is for this association that he is best known; he often played with a second bassist in the orchestra, at times Hayes Alvis or Jimmie Blanton. During that time he also recorded with Cootie Williams and Johnny Hodges. In