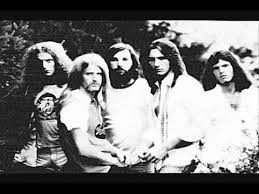 Band, US
Rock and Pop

Black Sheep, a Rochester, New York-based 1970s United States rock music band, was one of vocalist Lou Gramm's early working bands (it followed Poor Heart, which broke up c. 1970). The group, which had released the single Stick Around in 1974, the album Black Sheep in 1975, and the album Encouraging Words in late 1975, was no longer performing when Gramm was invited by Mick Jones to join the band Foreigner in 1976. Don Mancuso and Ron Rocco were later members of CHEATER,a local hard rock band from Rochester (upstate NY) that released a 10 inch record entitled "ten cent love affair" in 1980 on Mallard records. Black Sheep's bass player, Bruce Turgon played on Lou Gramm's solo albums in the late 1980s (which also featured contributions from another Black Sheep alumnus, guitarist Don Mancuso) and joined Gramm in one of Foreigner's later incarnations, in 1992. Gramm continues to tour, fronting the Lou Gramm Band, whose lineup for 2004-2006 included former Black Sheep guitarist Don Mancuso (guitar/bass), along with Ben Gramm (drums), Richard Gramm (guitar), and Andy Knoll (keyboards).

Without A Doubt on Non-Fiction by Black Sheep

Similak Child on A Wolf In Sheep's Clothing by Black Sheep

Strobelite Honey on A Wolf In Sheep's Clothing by Black Sheep

La Menage on A Wolf In Sheep's Clothing by Black Sheep