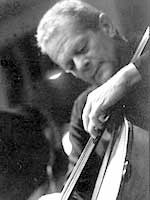 Bob Maize (January 15, 1945 – November 20, 2004) was an American jazz double bassist.Maize played piano from age seven and switched to bass at 13. After moving to San Francisco in 1963, Maize worked in the house bands of many jazz clubs in the city, including Soulville and Bop City. He played with Sonny Stitt, Philly Joe Jones, Vince Guaraldi, Mose Allison, Herb Ellis, Monty Alexander, Anita O'Day, Emily Remler, and Jon Hendricks; he also did a stint in a rock band as a bass guitarist.