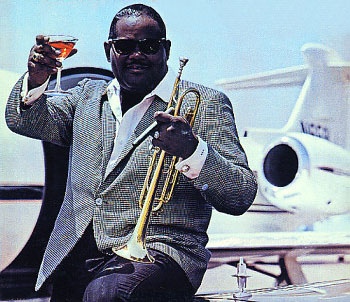 American jazz trumpeter and flugelhornist player. Born : May 19, 1934 in Hattiesburg, Mississippi. Died : June 10, 1998 in Los Angeles, California. He attended the Cosmopolitan School of Music in Chicago from 1952 to 1957. He then freelanced for three years in Chicago, working with Red Saunders, backing singer Billy Williams (5), and gigged with smaller groups. He spent 1960 in New York and then relocated to Los Angeles the following year where he permanently settled. His career includes touring with Vic Damone, heading his own groups and playing with such big bands as Charles Mingus (1964), Oliver Nelson, Gerald Wilson, the Frank Capp/Nat Pierce and The Clayton-Hamilton Jazz Orchestra. In addition to his big-band work, he was quite active in the studios. As a leader, Bryant led big-band dates for Vee Jay Records (1961), two for Pacific Jazz in 1969, and one for Cadet Records (1971), in addition to a sextet set for Cadet Records in 1967.

Happiness Is A Warm Gun on Earth Dance by Bobby Bryant

While My Guitar Gently Weeps on Earth Dance by Bobby Bryant

Love Is Like An Old, Old Man on Earth Dance by Bobby Bryant

Since I Left Home on Earth Dance by Bobby Bryant

I Want To Testify on Earth Dance by Bobby Bryant