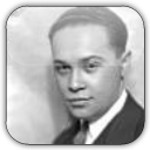 George Gard "Buddy" DeSylva was an American songwriter, film producer and record executive (born January 27, 1895, New York City, New York (USA) - died July 11, 1950, Hollywood, California (USA). Along with Johnny Mercer and Glenn Wallichs he founded Capitol Records. In 1925, DeSylva became one third of the songwriting team with lyricist Lew Brown and composer Ray Henderson. DeSylva, Brown and Henderson became one of the top Tin Pan Alley songwriters of the era. They collaborated until 1930 when their publishing firm was sold. DeSylva moved to Hollywood under contract with Fox Studios. In 1941 he became the Executive Producer at Paramount, a position he would hold until 1944 Inducted into Songwriters Hall of Fame in 1970.