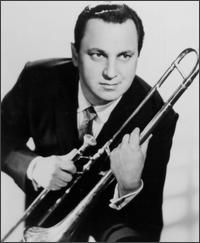 American jazz trombonist and bandleader. Played with : Tommy Dorsey (1938), Paul Whiteman (1939), Tony Pastor (1940), Bob Crosby, Billy Butterfield, Red McKenzie. In 1951 he formed his own band which took its first hit in 1952 with "Night Train" (by Jimmy Forrest) one million copies sold. Released during his career, many albums under his own name. Born : February 08, 1919 in New Haven, Connecticut. Died : September 27, 2010 in Ormond Beach, Florida.

Gimme A Little Sign - Remastered on Ultra-Lounge: On The Rocks by Various Artists

Summer In The City - 1997 Digital Remaster on Ultra-Lounge: On The Rocks by Various Artists

Night Train - Remastered 2002 on Big Band: Swingin' Through The Night by Various Artists

Kiss Of Fire on Revolving Bandstand by Tito Puente

Londonderry Air on The Moon Is Low by Buddy Morrow