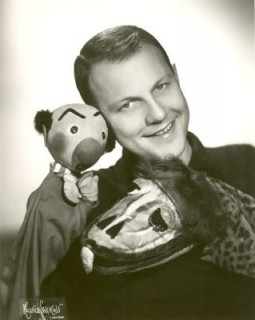 Franklin Burr Tillstrom (October 13, 1917 in Chicago, Illinois - December 6, 1985 in Palm Springs, California) was a puppeteer and the creator of Kukla, Fran and Ollie.Tillstrom was born in Chicago, Illinois, to Bert and Alice Burr Tillstrom. He attended Senn High School in Chicago and later the University of Chicago. While still a freshman, he was offered a job setting up a marionette theater with the WPA-Chicago Parks District Theatre and took it. He turned his attention to puppetry in the early 1930s and created Kukla in 1936. Kukla remained nameless until the Russian ballerina Tamara Toumanova referred to him as kukla, the Russian term for doll. Other famous puppets from the group included Ollie or Oliver J. Dragon, Beulah Witch, and Fletcher Rabbit. In 1939, he was invited to present

Medley: Here We Are / Mr. K and Mr. O / Hello Cutie (with Fran Allison) - Burr Tillstrom Performing as Kukla and Oliver J. Dragon on Songs by Kukla, Fran and Ollie by Burr Tillstrom

Kook-La, Frahn and O-Lee (with Fran Allison) - Burr Tillstrom Performing as Kukla and Oliver J. Dragon on Songs by Kukla, Fran and Ollie by Burr Tillstrom

Am I Getting Through to You (with Fran Allison) - Burr Tillstrom Performing as Kukla on Songs by Kukla, Fran and Ollie by Burr Tillstrom

At the Fair (with Fran Allison) - Burr Tillstrom Performing as Kukla and Oliver J. Dragon on Kukla, Fran & Ollie by Burr Tillstrom