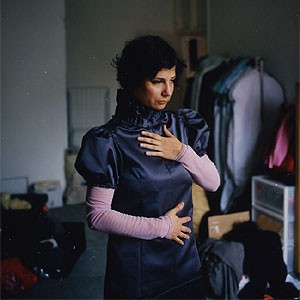 Carla Bozulich is an American musician based in Los Angeles, known for her work as the lead singer, lyricist and founder of both The Geraldine Fibbers and Evangelista and as a founding member of Ethyl Meatplow and Scarnella. Her 2006 album, Evangelista, was released by Constellation Records, that label's first release by a non-Canadian artist. In 2007, she also named her ever-evolving touring group Evangelista eventually recruiting bassist Tara Barnes and keyboardist/sampler Dominic Cramp as permanent band members. However, the rest of the lineup of Evangelista as a recording, performing and touring band changes each time they play or record. In keeping with this change, the albums Hello, Voyager, Prince of Truth and In Animal Tongue were released under the band name Evangelista. In 2014,

End of the World on Quieter by Carla Bozulich

Pissing on Evangelista by Carla Bozulich

Ain't No Grave on Boy by Carla Bozulich

Let It Roll on Quieter by Carla Bozulich

Time Of The Preacher on Red Headed Stranger by Carla Bozulich