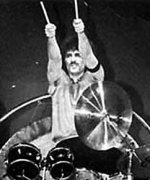 Carmine Appice (born December 15, 1946) is an American drummer and percussionist most commonly associated with the rock genre of music. He has received classical music training, and was influenced early-on by the work of jazz drummers Buddy Rich and Gene Krupa. Appice is best known for his associations with Vanilla Fudge, Cactus, the power trio Beck, Bogert & Appice, Rod Stewart, King Kobra, and Blue Murder, which also featured John Sykes of Thin Lizzy fame, and Tony Franklin of The Firm. He was inducted into the Modern Drummer Hall of Fame in 2014.

Nobody Knew (feat. Brian May) on Guitar Zeus 25th Anniversary by Carmine Appice

Where You Belong (feat. Slash) on Guitar Zeus 25th Anniversary by Carmine Appice