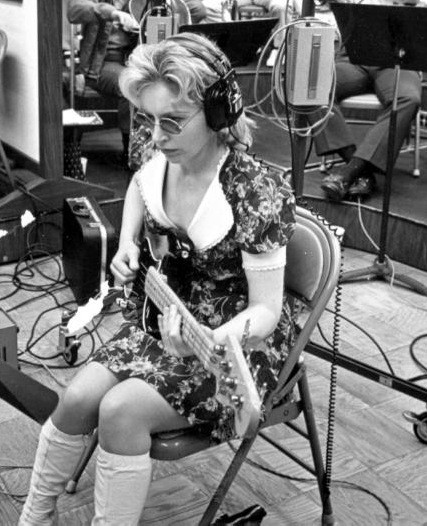 Born 24 March 1935, Everett, Washington, USA. Bassist. Kaye was one of a few female artists among the accomplished session musicians of the 'Wrecking Crew' Collective. Her distinctive bass-playing talents were originally rooted in the jazz arena, with the likes of Jack Sheldon, Billy Higgins and Teddy Edwards, before she became a 'first call' artist to Los Angeles studios. Especially for the The Beach Boys' Brian Wilson, who said of her “Carol Kaye was the greatest bass player I’ve ever met”. Zappa called upon her jazz skills for 12-string guitar work on Freak Out!, his choice no doubt influenced by her work on one of his favorite singles, Sixteen Tons by Tennessee Ernie Ford. In sharp contrast she laid down tracks for The Monkees hits and TV themes such as Mannix and Mission: Impossible. With more than 10,000 sessions to her credit Kaye has helped launch many an artist with her gifted work, in studios such as Gold Star Recording Studios, Western Recorders, Radio Recorders, CBS Studios and RCA Victor Studios where the Wrecking Crew helped to furnish the hits from California. Kaye really was one of the "California Girls". She has also produced a wealth of tutorial books and multimedia on the art of playing the bass and retired during the 1970s because of arthritis. Occasionally, members of the Crew would come together and release works in their own right. In this respect Kaye featured in the groups The Zodiac, The California Dreamers and Carol Kaye & The Greasy Bass Blues Band.