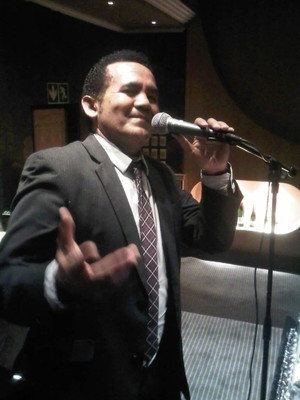 Cecil Mitchell started his singing career at the age of 14 at which time he chose to tour with various well known South Africa artists. He has since been working as a singer and entertainer for about 30 years. He recorded a few songs which were aired on radio and TV and sold countrywide during the 80's, hits like "Dear Schoolgirl", "Straight From The Heart" composed by Lloyd Lelosa and Thandiwe (1984) as well as Farewell My Love (1986). His voice appeared in a few advertisements and he has appeared on various music and variety programs on South African television. He has also traveled extensively in and around South Africa and Africa i.e. Malawi, Lesotho, Swaziland, Kenya and Nigeria. He currently performs at various hotels, restaurants, casinos, weddings, corporate and private company functions. His repertoire includes anything from jazz standards swing, reggae, rock & roll, the latest pop and dance songs and the favourites of the 60's to the 80's. He also plays percussion and the flute and collaborates with various musicians or as the lead singer in the band.