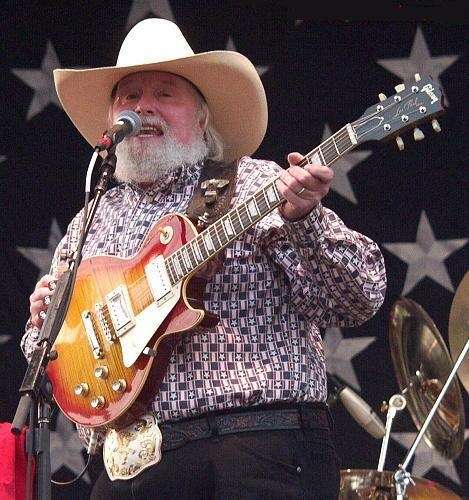 Charlie Daniels was Born 28 October 1936 in Wilmington, North Carolina, USA. Daniels, who wrote "Carolina (I Love You)" about his youth, was the son of a lumberjack and was raised with a love of bluegrass music. He borrowed a guitar when he was 15 years old and immediately learned to play basic tunes. He then acquired skills on mandolin and fiddle, but had to modify his playing when he lost the tip of his ring finger in an accident in 1955. He formed a bluegrass band, ''The Misty Mountain Boys'', but the group changed its name to ''The Jaguars'' following the single ''Jaguar'', which they recorded in 1959 (produced by Bob Johnston). Daniels said, "for nine years we played every honky-tonk dive and low-life joint between Raleigh and Texas". This enabled him to master a variety of musical styles, but his only national success came in 1964 when he wrote an Elvis Presley B-side "It Hurts Me", a tender ballad that remains one of his best compositions. In 1967, Daniels followed Bob Johnston his suggestion to accept regular session work in Nashville. He played electric bass on Bob Dylan's Nashville Skyline and later appeared on his albums Self Portrait and New Morning. He also worked with Marty Robbins, Hank Williams Jr. (on Family Tradition) and Ringo Starr (on Beaucoups Of Blues), and took Lester Flatt his place alongside Earl Scruggs. He produced albums by The Youngbloods and by Jerry Corbitt. The latter, in turn, produced one by Daniels, both of which were released in the USA by Capitol Records.

This Ain't No Rag, It's a Flag - Live on The Live Record by Charlie Daniels

Texas on Nightrider by The Charlie Daniels Band