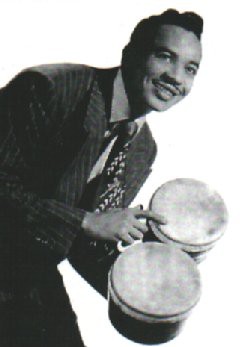 Francisco "Chino" Pozo (October 4, 1915, Havana - April 28, 1980, New York City) was a Cuban drummer.Pozo claimed to be the cousin of Chano Pozo, though this has been disputed. He was an autodidact on piano and bass, but concentrated on bongos, congas, and drums. He moved to the United States in 1937, and played with Machito from 1941–43 and with the Jack Cole Dancers from 1943-1949. Following this he played in numerous jazz ensembles, especially latin jazz and Afro-Cuban jazz; his credits include work with Jose Curbelo, Noro Morales, Tito Puente, Tito Rodríguez, Enric Madriguera, Perez Prado, Josephine Premice, Tadd Dameron, Charlie Parker, and Dizzy Gillespie. He toured with Peggy Lee in 1954-55 and played with Stan Kenton (1955), Herbie Mann (1956), Xavier Cugat (1959), and René Touzet