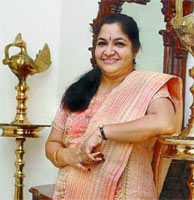 dr, *1963 IN, Kerala
Singer / Musician of Classical and World
A.k.a. Chithra Krishnan Nair

Krishnan Nair Shantakumari Chithra, often credited as K. S. Chithra or simply Chithra, is an Indian playback singer from Kerala. Chithra also sings Indian classical, devotional, and popular music. She has sung in different languages in a following order Telugu, Malayalam, Kannada, Tamil , Odia, Hindi, Assamese, Bengali, Badaga, Sanskrit, Tulu, Urdu, Latin, Arabic, Sinhalese and Punjabi languages. She has recorded more than 25,000 Songs for various films and albums. She is a recipient of six National Film Awards (the most by any female singer), six Filmfare Awards South and 31 different state film awards. She has won all the four south Indian state film awards. She was honored with India's civilian honor Padma Shri in 2005.Her song "Kannalane (Kehna Hi Kya)" from the film Bombay (1995) was