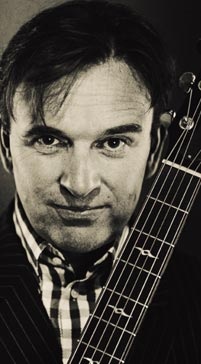 Singer, guitarist, songwriter and producer, born 4 November 1954 in Greenwich, England. Founding member of Squeeze in 1974. When that band first disbanded in 1983 he formed Difford & Tilbrook with fellow ex-Squeeze member Glenn Tilbrook. Squeeze reunited in 1985 to be disbanded in 1999. Difford then embarked on a solo career from 2000 before Squeeze reformed as a touring/recording band in 2007. Since then as well as performing in Squeeze, Chris Difford has continued to play live both in a solo setting and as a duo with Glenn Tilbrook, in each case generally playing acoustic sets comprised of Squeeze and solo material. He has also spent time in artist management working with among others Bryan Ferry, Marti Pellow and The Strypes.

Battersea Boys on The Last Temptation of Chris by Chris Difford