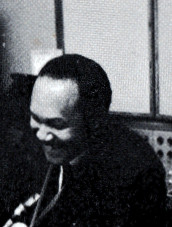 Chris Woods (December 25, 1925, Memphis, Tennessee – July 4, 1985, New York City) was an American jazz alto saxophonist.Woods played locally in Memphis early in his career before moving to St. Louis to play with the Jeter-Pillars Orchestra and trumpeter George Hudson. He then joined Tommy Dean's combo, recording with them for Town and Country, Miracle, and States. Striking out on his own, he first recorded as a leader in 1953 for United Records. In 1962 he moved to New York, where he played with Dizzy Gillespie, Clark Terry, Sy Oliver, and Ted Curson. He continued working with Terry into the 1970s, playing flute at times in his Big Bad Band. Jim McNeely played as a sideman on his 1978 release for Delmark Records. In 1983 he began playing in the Count Basie Orchestra, where he worked until