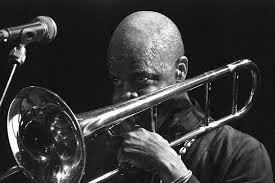 Craig S. Harris (born September 10, 1953) is a jazz trombonist and composer who has been a major figure in the jazz avant-garde movement since his stint with Sun Ra in 1976. Subsequently, Harris has worked with such notable jazz artists as Abdullah Ibrahim, David Murray, Lester Bowie, Cecil Taylor, Sam Rivers, Muhal Richard Abrams and Charlie Haden. Harris has also recorded since 1983 as leader for labels like India Navigation, Soul Note and JMT. For the latter he recorded with two different groups: the Tailgaters Tails was a quintet with clarinetist Don Byron, trumpeter Edward E. J. Allen, Anthony Cox on bass and Pheeroan akLaff on drums. His large ensemble project Cold Sweat was a tribute to the music of James Brown.

Mandela on İstanbul by Craig Harris & The Nation Of Imagination

Zoupy on İstanbul by Craig Harris & The Nation Of Imagination