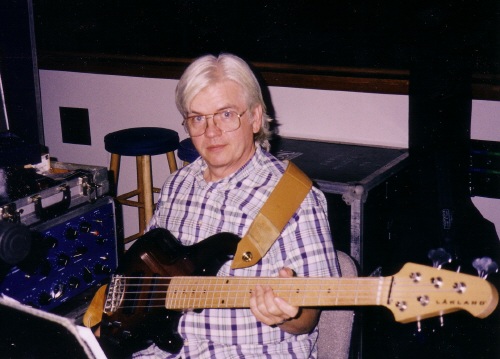 b, *1948 CA
Musician / Arranger / Producer of Rock and Pop
A.k.a. William David Hungate

American bassist, born August 5, 1948, Texas; noted as a member of Los Angeles pop-rock band Toto from 1977-1982. Boz Scaggs's "Silk Degrees" album of 1976 included Hungate and several other future members of Toto. Hungate's tracks featured the "hook" popping bassline on the single "Lowdown," and the lyrical bass fills on "Harbor Lights" and "We're All Alone." Since 1982 he has worked as a session musician in Nashville and has worked with Greg Lake, Bryan Adams, Dolly Parton, Rosanne Cash and Melissa Manchester among others. Hungate also plays guitar, saxophone and trombone and has produced and recorded with several country artists. He has performed on hundreds of albums, movie scores, TV shows and commercials and has won four Grammys for his work with Toto and Chet Atkins. David Hungate along with the other members of Toto inducted into the Musicians' Hall of Fame in Nashville in 2009.

Tahitian Skies/Chief O'Neill's Hornpipe on Another Country by The Chieftains

Heartbreak Hotel on Another Country by The Chieftains

Lament on Souvenir by David Hungate

The Leap on Souvenir by David Hungate

Only A Heart Can Know on Souvenir by David Hungate

Souvenir on Souvenir by David Hungate

Third Stone From the Sun on Souvenir by David Hungate

Dreamland on Souvenir by David Hungate

A Perfect Love on Souvenir by David Hungate