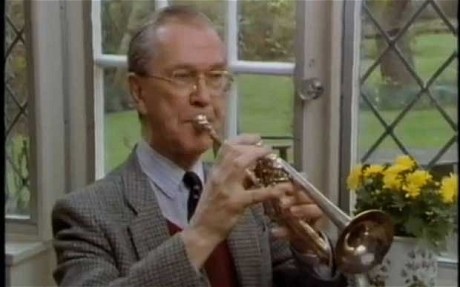 English orchestral, solo and session trumpet player. Despite his long career, he was probably best known for playing the piccolo trumpet solo on The Beatles' song, "Penny Lane". (2 April 1926, London – 29 April 2011) His early career benefited from the onset of World War II, as he was ineligible for recruitment, and was able to pick up a lot of work in London before and during his time as a student at the Royal College of Music, which was itself interrupted by his own call-up into the Band of the Scots Guards. After leaving the Royal College of Music, Mason became a member of the orchestra of the Royal Opera House, moving on later to the Royal Philharmonic Orchestra where he eventually became principal trumpet. After seven years in that role he moved to the Philharmonia, where he remained for most of the rest of his orchestral career. He was a professor of trumpet at the Royal College of Music for thirty years and thus taught many of the trumpet players who now make up the core of the profession in the UK. The Royal College of Music has awarded a David Mason Prize for Orchestral Trumpet Playing. On 17 January 1967 at Abbey Road Studios Mason recorded the piccolo trumpet solo which is a prominent part of The Beatles' song "Penny Lane". The solo, inspired by Mason's performance of Bach's 2nd Brandenburg Concerto with the English Chamber Orchestra, is in a mock-Baroque style for which the piccolo trumpet (a small instrument built about one octave higher than the standard instrument) is particularly suited, having a clean and clear sound which penetrates well through thicker midrange textures. Mason also contributed to several other Beatles’ songs, including "A Day in the Life", "Magical Mystery Tour" and "All You Need Is Love". Mason died of leukaemia in April 2011, at the age of 85.

The Judgement of Paris: Reciatitve - Air - Chorus on Rule Britannia by Various Artists

The Mirror on The Humorist by Various Artists