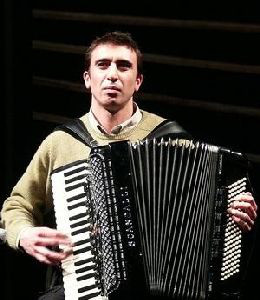 David Yengibarian was born in 1976 in Yerevan (Armenia). He began his accordion studies in the Yerevan Music School. He moved to Hungary in 1995 where he continued his music education. He has performed in several stage plays and films. On the soundtrack of the movie entitled Holstein Lovers he played with Ferenc Snétberger, the famous guitarist and composer of the soundtrack, and got acquainted with the brilliant double-bass player József Barcza Horváth with whom he has had a close personal and artistic relationship ever since. He was also the composer of several soundtracks for films such as György Farkas' Vérvonal (Blood Line), András Fésüs' Street, Heart, Beat and András Szőke's Három (Three). In concert he often plays his own compositions which incorporate a special mixture of Armenian folk music, Argentinean tango and the music of Astor Piazzolla. He has also played in several jazz and folk line-ups. Accepting several foreign invitations he has played before audiences in Paris, London, Amsterdam, the Terschelling Island, Vienna and at the Edinburgh International Festival. In Budapest he has had performances at the Fonó, Merlin Theatre, Trafó, Szkéné Theatre, Vista and the Matáv Music House. On May 23-24, 2001 he appeared with Ferenc Snétberger and József Barcza Horváth at the Archa Divadlo in Prague on the Khamaro Roma Festival. Again in Prague, he performed solo on June 23-24 in a stage-play directed by the sons of Milos Forman. On June 25 he played at a festival held in Cologne to celebrate the film entitled Gloomy Sunday, and was accompanied by Erika Marozsán (vocals) and Zsigmond Lázár (violin). In 1999 he founded Trio Yengibarian with the aspiration to create a fusion of the Argentinean tango, the "New Tango" of Astor Piazzolla, and various types of folk music. After several changes in the line-up the trio recorded his first CD with József Barcza Horváth on double-bass and Gábor Juhász on guitars. Trio Yengibarian introduced the material of Tango Passsion (BMC CD 051) playing before Terje Rypdal and Palle Mikkelborg at the BMC Jazz Evening on June 22, 2001 in Budapest. From 2002 the new lineup of the trio includes János Egri on the bass and József Botos on the guitar.

Hunvar 2006 on On Eastern Way by Boris Kovac & David Yengibarian

The Morning on On Eastern Way by Boris Kovac & David Yengibarian

Pandoukt on On Eastern Way by Boris Kovac & David Yengibarian