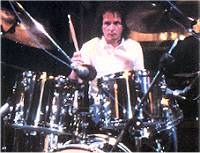 Welsh drummer and author, born 14 April 1949 in Cardiff, Wales, UK. He started playing drums at the age of 14. He formed the band Amen Corner with legendary guitarist Andy Fairweather-Low. 'Amen Corner' was one of the most successful European bands in the late sixties, with hits such as "Gin House Blues", "Bend Me Shape Me", "Well Fly High In The Sky", "If Paradise Is Half As Nice", "Hello Susie", "Living In A World Of Broken Hearts" and "At Last I’ve Found Someone To Love". Later then, when 'Amen Corner' disbanded, after and audition, he became a member of The Bee Gees in 1973.