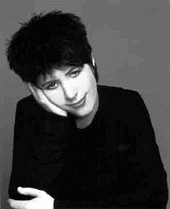 Diane Eve Warren (born September 7, 1956) is an American songwriter. Her songs have received eight Academy Award nominations, five Golden Globe nominations, including one win, and twelve Grammy Award nominations, including one win. She was inducted into the Songwriters Hall of Fame in 2001. Her success in the US has been paralleled in the UK, where she has been rated the third most successful female artist. Peter Reichardt, former Chairman of EMI Music Publishing UK, commented; "She's the most important songwriter in the world."