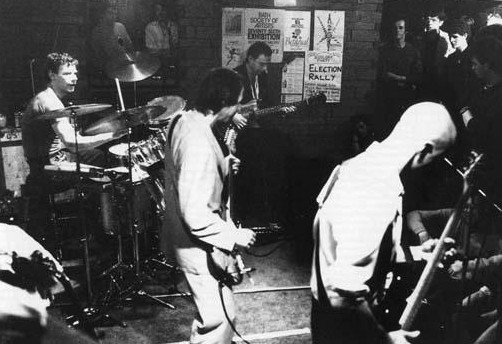 The original name given to the 1981 formation of King Crimson, before they "knew (they) were King Crimson". Members are: Adrian Belew, Bill Bruford, Robert Fripp, Tony Levin. Rehearsals began April 2nd, 1981. The first live show was played at the Moles Club in Bath on April 30th, 1981. The final live show under this name was played at the University Of Brussels on May 16th, 1981. Recording began for the album to share the band's name two days later, on May 18th, 1981, and was ultimately released as King Crimson - "Discipline".

Everywhere We Go on Saints & Sinners by Discipline

Hooligans Heaven on Love Thy Neighbor by Discipline

Belief on Downfall of the Working Man by Discipline

These Boots on Saints & Sinners by Discipline

Red & White Army on Downfall of the Working Man by Discipline