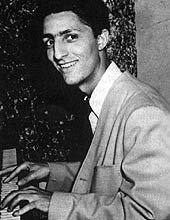 Michael "Dodo" Marmarosa (December 12, 1925 – September 17, 2002) was an American jazz pianist, composer, and arranger.Originating in Pittsburgh, Pennsylvania, Marmarosa became a professional musician in his mid-teens, and toured with several major big bands, including those led by Tommy Dorsey, Gene Krupa, and Artie Shaw into the mid-1940s. He moved to Los Angeles in 1945, where he became increasingly interested and involved in the emerging bebop scene. During his time on the West Coast, he recorded in small groups with leading bebop and swing musicians, including Howard McGhee, Charlie Parker, and Lester Young, as well as leading his own bands.

Where Or When on Jug & Dodo by Gene Ammons & Dodo Marmarosa

For You on Jug & Dodo by Gene Ammons & Dodo Marmarosa

Tone Paintings I on Dodo’s Bounce by Dodo Marmarosa