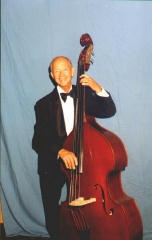 American jazz double bassist and bandleader. Born : July 18, 1927 in Salt Lake City, Utah. Died : July 26, 2012 in Los Angeles, California. From the 40s he he did extensive work as a session and touring musician. In the 1970s and '80s he composed and arranged for film and television and worked with Burt Bacharach between 1976 and 1984. Don played with : Stan Kenton, Nat King Cole, Dexter Gordon, Zoot Sims, Maynard Ferguson, Shelly Manne, among others. As a bandleader he released three albums under his own name.

Monotones on The Great Åke Persson by Various Artists