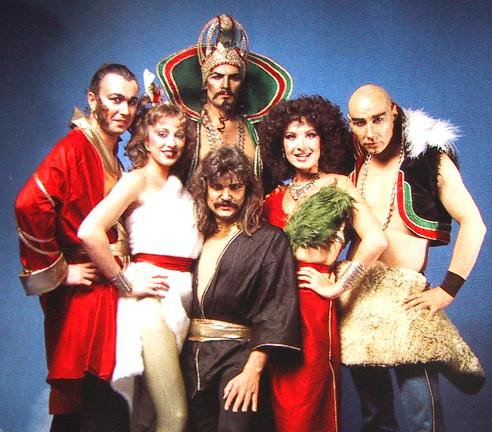 German pop band created in 1979 to compete in the Eurovision Song Contest. The name of the band is the German spelling of "Genghis Khan", and was chosen to fit the song of the same name written and produced by Ralph Siegel with lyrics by Bernd Meinunger. Appearing at the height of the disco boom and following on the heels of other German-produced bands such as Boney M., Arabesque, and Silver Convention, the band achieved wide popularity throughout the world, especially in Europe, Russia, and Japan, though they went wholly unnoticed in the United States. Their songs invariably were themed on historical figures and exotic cultures and locales. Though the group broke up in the mid-1980s, it has enjoyed a recent resurgence in popularity on the internet due to a video of them performing their hit song "Moskau" being discovered. The video and the song associated with it have become a popular topic on blogs and can be considered an internet fad. The band re-formed in late 2005. Original lineup was: Steve Bender, Wolfgang Heichel, Henriette Heichel, Leslie Mandoki, Edina Pop, Louis Hendrik Potgieter.

Moscow on Moscow by Dschinghis Khan

Loreley on The Jubilee Album/Digipack by Dschinghis Khan

Rom on The Jubilee Album/Digipack by Dschinghis Khan